August 4, 2017
Pukkelpop and ‘De Vlaamse Waterweg nv’ stunt for the third year in a row with a logistical cooperation. After back stage equipment in 2015 and containers in 2016, this year the main stage is brought to the venue via waterways.

After successful transports via water in 2015 and 2016, Pukkelpop and ‘De Vlaamse Waterweg nv‘ pull of another festival stunt. This year the main stage, excluding artists, is introduced to the waterways. In Leuven, the main stage elements were lifted onto a ship. Which departed from there to Herent to load 8x 40ft containers (= 8 trucks or 16 TEU) for quay 118 in Antwerp. After unloading these containers in Antwerp, the ship set sail to ‘Haven Genk’ with 8 new High Cube containers. A perfect example of combined transport and the inadvertent transport possibilities of inland shipping.

On the one hand, the transport of such large constructions once again proves the power of the waterway. Water transport takes place without any obstacles to road traffic and without exceptional guidance. Inland shipping is the ideal mode of transport for such large parts. By bringing shippers into contact, they can also match their transport needs. This makes it possible to efficiently bundle cargo and utilize the space on the ship optimally.

“Thanks to the multimodal benefits, we again cooperate with the inland shipping services for the 2017 edition”, so confirms Chokri Mahassine, Pukkelpop-organizer.

‘De Vlaamse Waterweg’  wants to raise awareness and convince companies of the benefits and often unprecedented possibilities of the waterways. The cooperation with Pukkelpop is a good example of how that goal can be met. In 2015, there was the promotion of innovative concepts to transport pallet feed with back stage materials and in 2016 that material was also supplied by waterways in decorated containers. The transport of this year shows the possibilities of traditional inland shipping on smaller ships and combined transport.

The loaded ship ‘Kemp 2’, owned by Patrick Van Stappen, departed from the quay of the company Celis in Leuven to ‘Haven Genk’. From there on Move Intermodal organized the transport of the stage elements between the terminal and Pukkelpop. The last leg, on the venue itself, is for Stageco.

“Combi modality is the future”, said Luc Driessen, CEO of Move Intermodal. “An initiative like this, on a limited scale, provides a huge amount of information from the modal shift perspective, whereas pre and after haulage by truck are combined with the line haul via water.”

“Inland navigation wants and can take every transport challenge and the transport of the Pukkelpop stage elements has proven it”, says Friede Brepoels, chairman of ‘De Vlaamse Waterweg nv’. “We are pleased to note that transport via waterways is increasing. For example, for building projects in cities, one is increasingly aware of the supply of materials by water to minimize traffic congestion.”

“With this initiative we want to make everyone aware about the possibilities of transport by water and we ask entrepreneurs to pay attention to the ‘blue water highway’ in their backyard which provides an excellent alternative for road transport” so suggest the initiators. In addition it is next to an exercise in sustainable transport also a joint investment by Pukkelpop and ‘De Vlaamse Waterweg nv’ in the fame and international allure of Belgium as a festival nation.

Pukkelpop and ‘De Vlaamse Waterweg nv’ stunt for the third year in a row with a logistical cooperation. After back stage equipment in 2015 and containers in 2016, this year the main stage is brought to the venue via waterways. 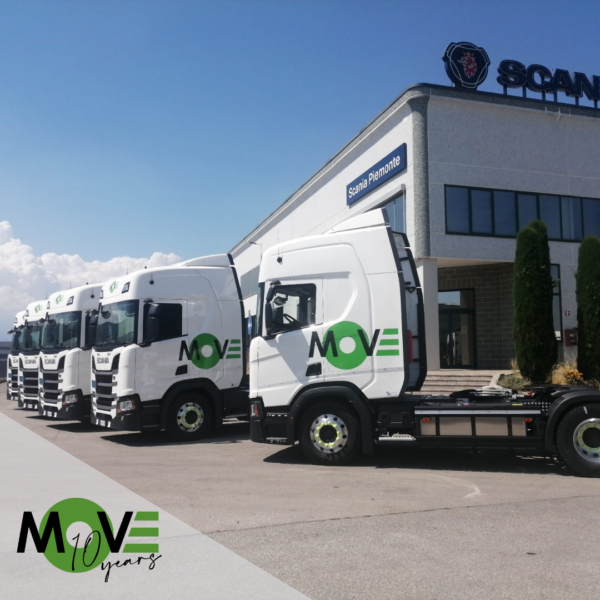 An exclusive partnership between Move Intermodal and Scania 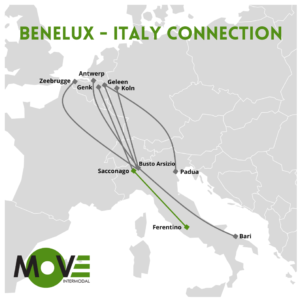 New connection: From Northern Italy to the Lazio area 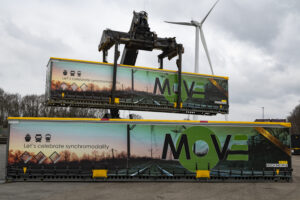 Are you interested in the services of Move Intermodal? We would be glad to provide you an intermodal solution for your transport flows throughout Europe. You can direct your rate request directly to our sales team by filling out the form! We will provide you a competitive offer as soon as possible.